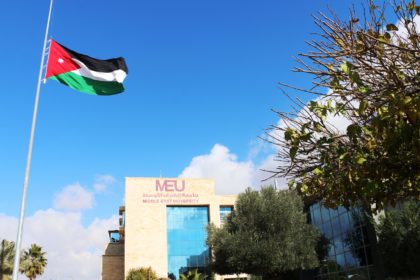 AMMAN – Middle East University lowered the Jordanian and Omani flags on its campus to half-staff to mourn the passing of one of the most prominent leaders of the Arab and Islamic world, his Majesty the Sultan Qaboos bin Said bin Taymoor, the Sultan of Oman.

The decision was made in response to the Royal Hashemite Court’s announcement which stated that the flags in the Kingdom will be lowered to half-staff for three days, starting Saturday January 11, 2020, to mourn the passing of his Majesty the Sultan Qaboos bin Said bin Taymoor.

Dr. Yacoub Nasereddin, the Chairman of the Board of Trustees, and Prof. Mohammad Al Hileh, the University President, extend their deepest condolences to MEU’s Omani students, the Omani people, and all Arab and Islamic nations.