Nasereddin Converses with the Law Faculty Members of MEU 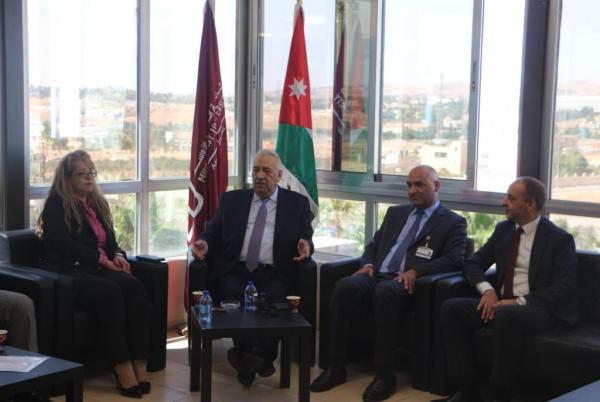 This Thursday evening in his capacity as member of the Royal Committee for Modernizing the Political System, Dr. Yacoub Nasereddin met with the members of the Faculty of Law at MEU.

During the meeting, Dr. Nasereddin discussed the committee’s recommendations and the resulting decisions about the participation rate of women and the youth in the political process. In addition, he discussed the implications of the Party’s Law and the Local Administration Law.

In his third meeting, he explained that there is a general approach to engage university students in party work, and expressed his concern about the approach that will force party work onto university campuses on the account on its main educational role.

He continued by saying that everyone must realize that there is an approaching point of transformation that requires everyone to act with awareness and possibility, and recommended being alert to any anticipated changes with an open mind.

What we are witnessing currently, he added, is a radical political shift that gives the impression that the party work in Jordan is becoming activated within factual frameworks, requiring all community groups in all locations to fight rumors and overcome the obstacles hindering the country’s real advancement.

At the end of the discussion, Dr. Nasereddin answered several questions about the nature of work the Royal Committee does. Some of the attendees asked about some of the obstacles that might affect the application of the outputs of the Royal Committee and proposed some suggestions the university can put in place.