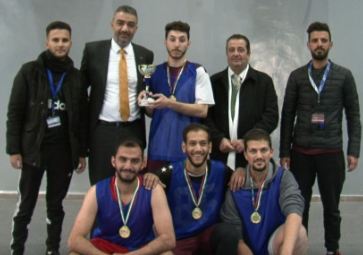 Refereed by the Head of the Sports Activities Division, Captain Taha Al Hawatmeh, the 6 teams, representing each of the University’s faculties, went head to head. The student spectators of the final match watched with great excitement as the Faculty of Engineering came out the victors, taking first place after winning against the Faculty of Pharmacy.

Dr. Ma’moun Al Hunaiti, the Dean of Student Affairs, declared the Faculty of Engineering as the champions of the tournament, awarding them with gold medals and the tournament cup. He stated, “The University organises such tournaments in order to enact its philosophy that calls for creating an interactive environment that supports our talented students in all their academic and extracurricular endeavours.”