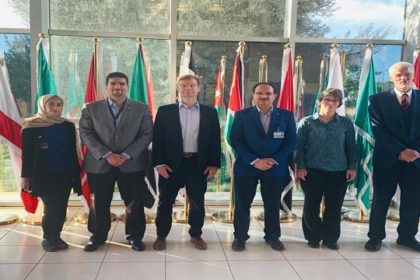 Amman – The Middle East University received a German academic delegation from Hamburg Technical University to discuss ways of joint cooperation and enhancing knowledge and research exchange between the two sides.
During the meeting, which was attended by the Head of Renewable Energy Department, Dr. Samer Asaad, Vice President for Academic Colleges Affairs, Dr. Alaeddin Al-Halhouli stressed that the Middle East University opened new horizons for new types of cooperation in the fields of knowledge transfer and benefit from the best international experiences. Prestigious international universities, within the framework of the university’s strategy to open up to the global space to develop university science and teaching methods.
For his part, the German delegation praised the experience of the Middle East University in attracting and embracing international universities in the Kingdom, pointing to the excellence of academic and administrative efficiency that manages the university, which reflects positively on the level of higher academic education in Jordan, praising at the same time the depth of bilateral relations between the two countries. Jordan and Germany.
Dr. Al-Halhouli gave an explanation of the university, its faculties, departments and academic programs offered in various degrees, in addition to the academic programs and specializations of the University of Bedfordshire, and the British Bachelor of Pharmacy (MPharm) program with the University of Strathclyde.
It is worth mentioning that the Middle East University seeks to gain many international academic relations to provide a high quality education level in the Arab world.