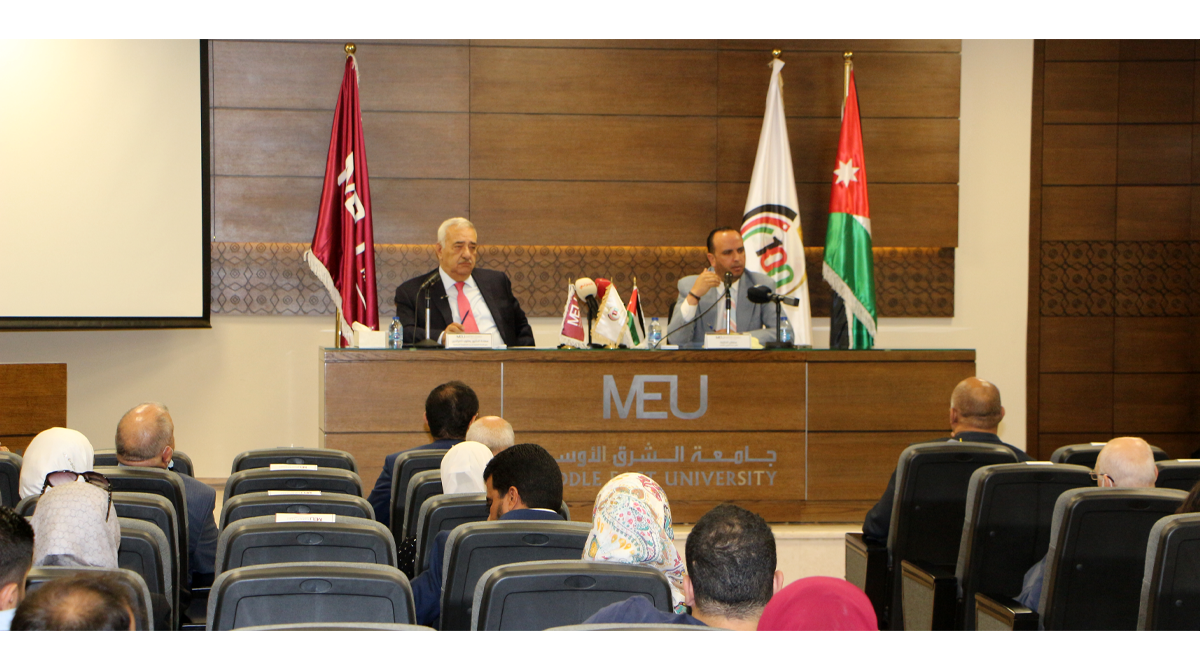 Amman – MEU hosted Dr. Yacoub Nasereddin, member of the Royal Committee to Modernize the Political System and Mr. Sultan al-Khalayleh, and the Rapporteur of the Youth Empowerment Committee, in a discussion meeting with a host of master and bachelor students from the faculties of media in Jordanian universities

Dr. Nasereddin spoke about the significance of the knowledge pyramid and of promoting knowledge through data and information analysis, saying that it is important to develop such knowledge and formulate its outputs to mainstream its benefits within the correct methodological rules of analysis. He pointed out that the Youth Empowerment Committee invests in everything that empowers the youth in the political sector, and tries to determine the obstacles they face in practicing their active role in the political life, making their voice heard by decision makers and finding solutions to their problems.

Al-Khalayleh also spoke saying that the Committee’s work aims to bridge the gaps between the actual reality of the political life and the desired goal according to the royal vision. He stressed the importance of media in the formation and the promotion of trust in Jordanian citizens and securing the public opinion of different legislative and executive entities and grass roots. He pointed out also that the role of the committee is focused on listening to the opinions of the youth and transferring them to the royal committee.

This was followed by a discussion on various topics and proposals, which were oriented towards the political empowerment of the youth through developing educational curricula and academic courses from school to university, especially in light of the trend to change the required age for running for the House of Representatives. Discussion also included the importance of promoting the community service culture and voluntary work by encouraging universities to show more interest in these areas, as well as raise the level of political culture in students and open opportunities for the youth to engage in the political work.

The All Jordan Youth Commission (AJYC) President also spoke by thanking MEU for hosting this important discussion, and for listening to the opinions of the university students to be included in the paper the Youth Empowerment Committee will submit. He seconded the opinion of Dr. Nasereddin on the importance of the knowledge pyramid for qualifying the youth and strengthening their political abilities. He assured that the Jordanian youth is capable of submitting proposals and opinions that contribute to modernizing the political system and be concerned with important issues and the laws that regulate the political life, in order to carry out the needed reforms and advance the Jordanian state. He also spoke about the approach His Highness the Crown Prince is taking to adopt the youth issue and to encourage them to take a bigger opportunity to engage in the political life.

Prof. Ala’addin Al Halhouli, President of MEU, also expressed his content to having hosted this discussion meeting, pointing out to the role of MEU in promoting governance springing from its belief in the role of the youth and their capability to manage transparent change by applying and modernizing legislations, laws, and regulations away from all personal, tribal, and gender-related criteria. He also assured the importance of benefiting from the experience of older youth and taking their opinions into consideration.

Having listened to the opinions and proposals of the students and the attendees, Dr. Nasereddin said that the committee shall formulate a policy paper that includes all the proposals and opinions suggested and discussed during the meeting, including updating academic courses in accordance with important political issues. He invited the youth to invest more importance in modern technology and benefit from available knowledge to lead a positive change and advance the Jordanian state and its people. He also talked about the importance of volunteering in the public work and that of the youth social capital to lead the mentioned change. It is necessary, he said, to create a national strategy to advance the role of the youth and promote its social place on different political levels and in national parties.