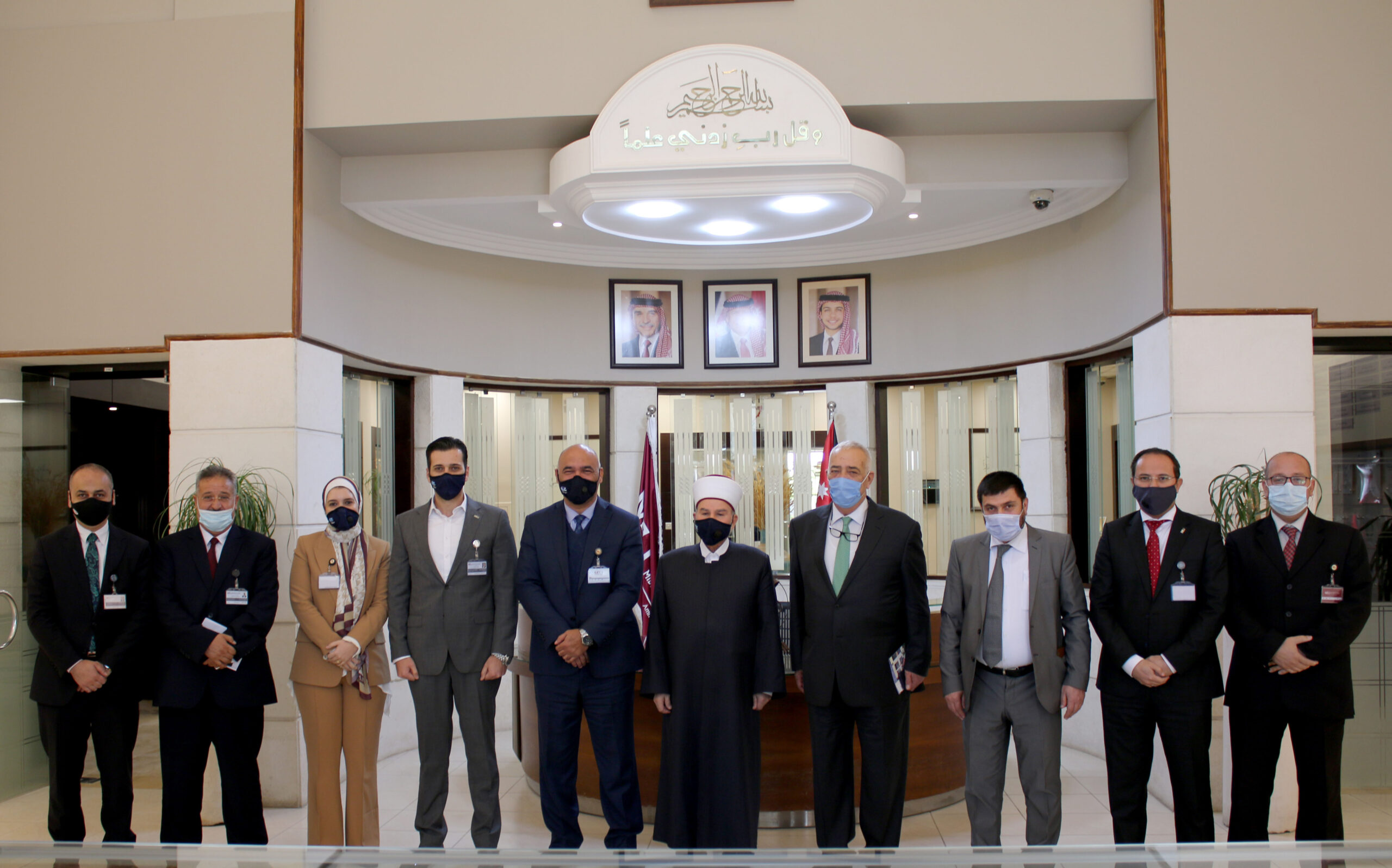 Middle East University received his Eminence, the Grand Mufti of Jordan, Dr Abdulkarim al-Khasawneh, on Sunday, to discuss the cooperative relations between the university and the General Iftaa’ Department and to stand on the latest developments faced by the society. The two sides worked on establishing new cooperation frameworks, in accordance with the university’s social responsibility policy.

The Chairman of MEU’s Board of Trustees, Dr Yacoub Nasereddin, welcomed Dr al-Khasawneh and expressed his appreciation of his Eminence’s visit and interest in launching joint work with the university. He praised the previous cooperation between the university, the Islamic Law Institute and the Supreme Judge Department and said that he is looking forward to the upcoming cooperation with the General Iftaa’ Department.

Dr Yacoub Nasereddin stated that establishing partnerships with the public and private sectors is at the top of MEU’s priorities, being an academic institution that has always demonstrated its role in community service by working on the ground, through projects, agreements and partnerships that generate benefit for our great country, under the wise leadership of his Majesty King Abdullah II bin al-Hussein.

In his opening speech, Dr al-Khasawneh commended MEU for its role in community service, which it has long been known and acknowledged for. He recalled the previous partnerships established with the university, in cooperation with the Supreme Judge Department and the Judicial Institute, and the major project in which the university taught domestic reform courses all around Jordan.

His Eminence added that it is vital and necessary to promote cooperative relations in light of the current circumstances the country is facing. He identified the chief areas that require cooperation and networking among all who believe in the urgency of offering support and assistance to the society. He highlighted that such areas include social solidarity, unity and growing a sense of responsibility towards the law and public safety.

In his speech, the MEU President, Prof. Ala’aldeen al-Halhouli, addressed the many issues and future expectations the two sides look to cooperate on, valuing the General Iftaa’ Department’s desire to work with the university and its confidence in its ability to rise up to the challenge.

Prof. al-Halhouli affirmed MEU’s keenness on launching joint operations with private and public institutions, recalling the essence of the Amman Message that placed Jordan amongst the leading countries in the Islamic world. He ended his speech by saying he considers any partnership with Jordan’s active sectors as a translation of Jordan’s efforts to endorse moderation and tolerance; values that lie at the heart of our religion.

The meeting was attended by Dr Walid ash-Shawish from the General Iftaa’ Department, who stressed the importance of Jordan’s role as touched on by Prof. al-Halhouli, and pointed to the need for establishing cooperative relations with the aim to promote Jordan’s role as an advocate for peace and tolerance and to hone individual skills at both sides of any agreement the General Iftaa’ Department signs.

ash-Shawish shared his plans for organising training workshops and discussion sessions focused on specific topics to be later agreed on, for preachers, muftis, advocates and Shari’a students. He presented a model for discussing ‘religiosity in the time of epidemics’, and highlighted the importance of outlining the necessary skills and aptitudes for learning religion.

The Vice President for Administrative and Legal Affairs, Prof. Anees Mansour, indicated in his speech that the laws applied by the General Iftaa’ Department are not limited to ​​issuing fatwas, but rather cover the guidelines for conducting research and studies on religious matters that are of concern to the society. He pointed out that this is a purely academic aspect, and is considered a common ground between an academic institution such as MEU and the General Iftaa’ Department.

At the end of the meeting, the two sides reviewed the chief issues they are looking to address with their future cooperation, and that are of primarily concern to the society. The discussion revolved around issues such as the harms of exploiting the current pandemic, maintaining positivity and cooperation initiatives. The two sides agreed to further look into the issues at hand and outline plans for on-ground action in the upcoming days.